Patterns of the Electromagnetic Spectrum

This section picks up from where the section on the Interaction of the Quanton and the Quanta Field left off. It is meant to provide a taking off point for development of the photonic quanton patterns that make up the electromagnetic spectrum (EMS).  We are told in The Urantia Book that the EMS is made up of 100 chords.  I have assumed that each chord is the same size and that the pattern is that of the sacred geometry Seed of Life which contains eight quantum (six Quantons).

In the Quanton Physics section you saw how growth of the quanton patterns creates the golden ratio.

Note how the black segment of the hypotenuse traces the circumference of each previous pattern as the pattern spins and grows. It can be seen that the mechanics of Quanton Physics solves the mystery of the Golden Ratio (1.618∞).
The golden ratio can also be calculated by adding 1 to √5 and dividing by 2.
I wanted to see how this might relate to the Quanton and sacred geometry.

The hypotenuse of the 1×2 rectangle used to construct the golden mean is equal to √5 as shown by the green/solid black hypotenuse of the 1×2 dotted line rectangle in the lower circle (left). I extended the hypotenuse by 1 (dark black dotted line) locating the center of a second circle (black) at less than 60° (52½°?). The golden ratio (green line) is one half of the hypotenuse when extended by 1. The upper circle of the quanton pattern (dotted blue) touching at 60° would have to be moved slightly upward to match this new center. Extension of the chord lines of the lower circle would then line up tangentially with the relocated upper circle. That breaks up the connecting chords of the dotted blue circle which seem more correct for a "material" quanton pattern. This could be related to the creation of our third dimension by the passage of time. This might explain four offsets of 7½° (30°) which may occur as patterns of the EMS spin and grow ending in the "material" quanton patterns which can appear to include 90° angles.
Go here to see how the golden ratio expresses the interrelationship between gravity and charge. As the gravitational field falls off by the square, the charge field falls off by the quad. This relates to the solution of the unified field problem as proposed by Miles Mathis where it was postulated that what we see as gravity is actually the net effect of two opposing forces.

Some thoughts regarding growth of the EMS patterns

The following images are based on the theory that the patterns of the electromagnetic spectrum (EMS) travel in a right hand screwing motion of first one plane and then a second, third and fourth plane as the patterns grow. The pattern is rotated by 30° as each plane is added for a total of 120°. When the largest pattern of the EMS is exceeded, the structure of the pattern condenses and the linear motion is converted into internal vibration over the four planes. The time required to extend the apparent vibration rate over multiple planes establishes the third dimension that we see in the non-photonic quanton patterns of our "material" world. The 120° rotation may allow creation of the 90° angles that we "see" in some of the larger quanton patterns.
The foundation level of four chords

Each of the four circles (spheres), in the image on the left and those below, represents one of the 100 chords in the EMS. Each chord is assumed to be one Seed of Life sacred geometry pattern exposing eight quantum spheres in the Quanta Field (six Quantons). I call this the trolley part of the EMS patterns. Its interaction with the Quanta Field results in movement of the entire pattern through the Quanta Field (space) at the speed of light. Direction of travel is along a line connecting the centers of the two separated circles. 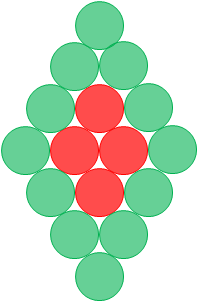 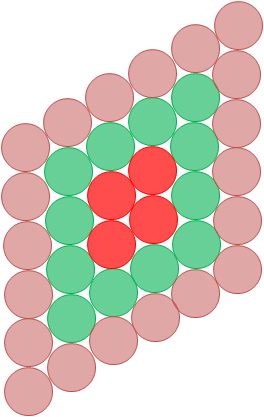 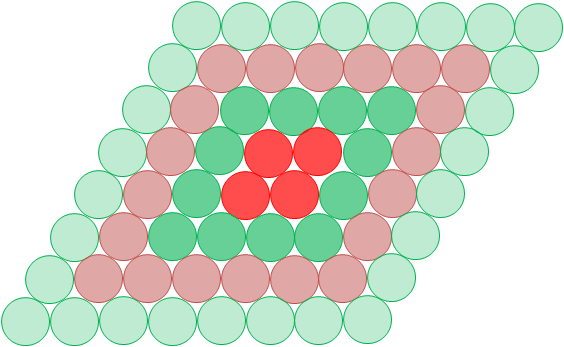 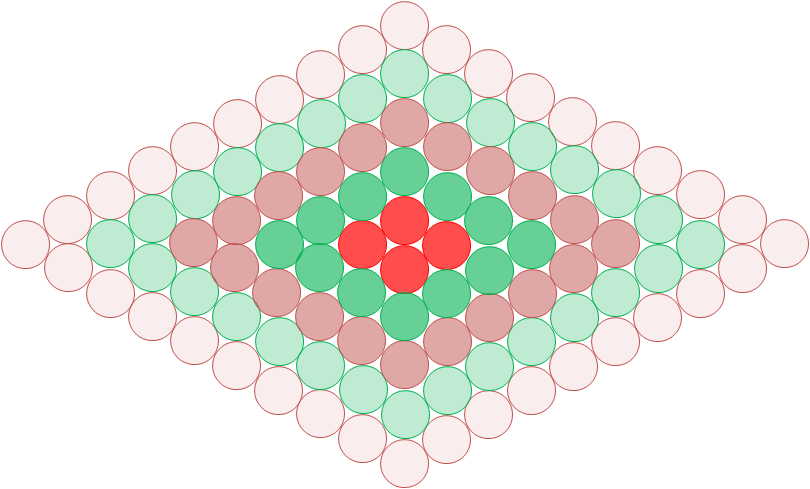 The Geometry of Light 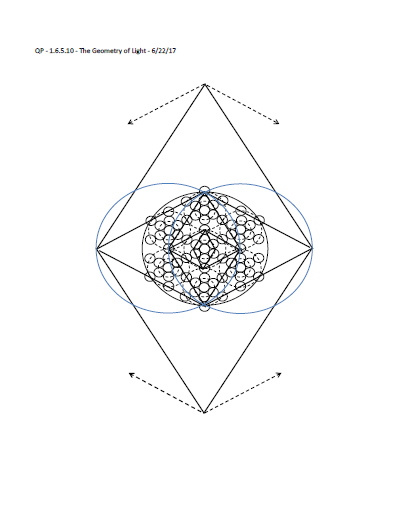 The image on the left is recreated from The Ancient Secret of the  Flower  of Life Volume 2 by Drunvalo Melchizedek. It is Fig. 12-21 on page 327. I highly recommend both volumes for insight regarding sacred geometry and the specific geometry of light. I have added the vesica piscis formed by the two blue circles to show that each of the rhombic shapes is associated with a vesica piscis of its own. The rhombic shape is actually two tetrahedrons with one common face (see the largest vertical shape). The next smallest rhombic shape (2 horizontal tetrahedrons) fills the open space in the top view of the larger vertical shape and creates the next smallest vertical set of 2 tetrahedrons.
The length and width of each rhombic shape is related by √3. The diagonal across the base of a 1x1x1 cube is √2 and the vertical diagonal through the 1x1x1 cube is √3. I have added the four dotted arrows to show the four male √3 spirals that together create the growth pattern of the rhombic shapes. To see the spirals trace backward from each arrow making 90° turns moving to the next smaller shape at each turn.
It is interesting to note the similarities between my four growth patterns and the geometry of light as presented by Drunvalo. I believe that my patterns can be modified to bring them into alignment with his concept. The Urantia Book tells us that the visible light of the sun is found in the 46th chord of the 100 chords in the electromagnetic spectrum (EMS). This would make it one of the largest patterns as I believe that the EMS patterns build to a maximum width at the mid point, increasing and decreasing alternately in the manner of a slinky toy, coiling and uncoiling, as they travel at "c".
When a single Quanton is added to the largest EMS pattern, condensation (compression) occurs and spherical rotation replaces the slinky toy action converting the previous linear motion into internal vibration within the electron pattern. An alternative possibility is that the next pattern up from the EMS is actually a Hydrogen atom pattern in which the proton, neutron and electron appear simultaneously. In this scenario, the electron orbit is actually keeping the Hydrogen atom in balance as the spherical rotation of the pattern causes the proton and neutron to continuously alternate identity.
This is as far as I have been able to go without help. You are invited to join in the effort to take it to the next level.
Go to Home page