Here are my thoughts on how this is done.

As the basic Quanton pattern piece interacts with the Quanta Field it begins to spin as shown above. Each image is shown at a 60° axis point. Note the alternating of the green color to indicate that the spheres are alternately out of sync (green) or in sync (light red) with the Quanta Field. In each of the 60° positions shown, an additional Quanton can be added by overlapping (sharing) one of the loops (spheres). The end result is the six Quanton pattern shown in the fourth image. The series of four images is repeated with circles replacing the spheres for added clarity. This “first vortex motion” creates the Genesis, or sacred geometry, Seed of Life pattern shown in the ninth image. A torus shape is formed when this pattern is spun around its central axis. The Seed of Life and the torus have been found to be fundamental to the formation of the structures of our material world.

Adding six Quantons to fill the open loops completes the pattern. This is shown in the first and second images below. There is a second quantum hidden behind the one in the center of the pattern. Note that we have the beginning of the extension of vibration lines along the six axes radiating out from the “zero point” quantum sphere (the solid red circle). The six inner circles now show as extensions of the six vibration axis lines (second image). This “second vortex motion” fills the six open loops and completes the sacred geometry Egg of Life pattern show in the third image below. The Egg of Life is fundamental to the creation of everything about our physical being.

Once again, the pattern can be enlarged by overlapping a loop in each of the six outermost Quantons as shown in the first image below. This “third vortex motion” again fills six open loops now completing the sacred geometry Flower of Life pattern as shown in the second and third images. Sacred geometry represented spiritual enlightenment passed down to the enlightened few through the ancient mystery schools and the knowledge was guarded closely. The Flower of Life symbol was always enclosed in a double ring as shown in the fourth image. The purpose of the double ring was to hide the last two vortex motions of eighteen and twenty four loops (spheres), except for the portions enclosed by the rings. In the actual Flower of Life symbol, nothing is shown outside the enclosing rings. The Flower of Life symbol is found throughout the ancient world. What may be the oldest depiction was found at the temple of Osiris in Egypt. It dates back to 6,000 or possibly even 10,000 BC. It was etched into the stone in a process unknown to science today. 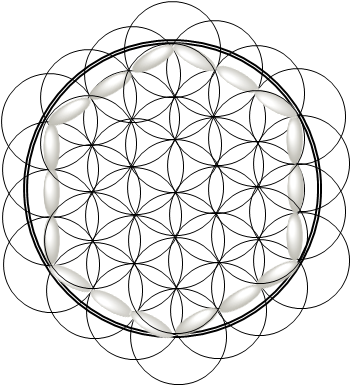 The last two vortex motions involving the addition of first eighteen and then twenty four Quantons are shown below in the first and second images. The third image shows how the Flower of Life is embedded in this larger pattern. The thirteen highlighted circles create the sacred geometry Fruit of Life which is the pattern which was kept hidden by the double ring around the Flower of Life symbol. 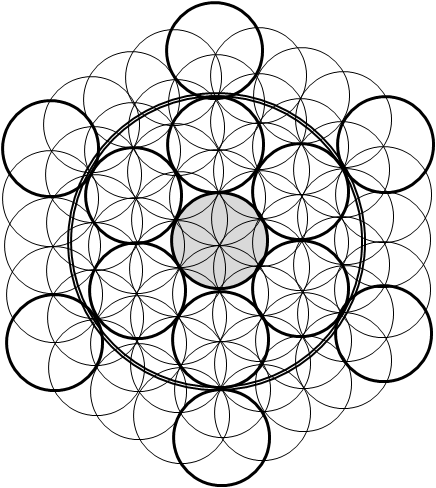 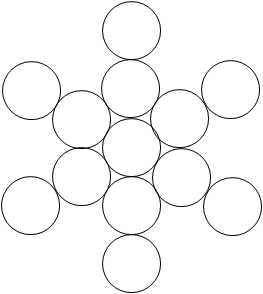 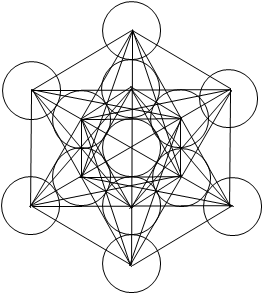 In Volume 1 of Drunvalo Melchizedek’s The Ancient Secret of the Flower of Life he points out that the five Platonic solids which create the framework of our “material” world can be found hidden in Metatron’s Cube. They can be discovered simply by eliminating unnecessary lines (see below). It is significant that each of the Platonic solids has the 720° of internal angle associated with patterns created by spherical rotation
CUBE                     STAR TETRAHEDRON            OCTAHEDRON 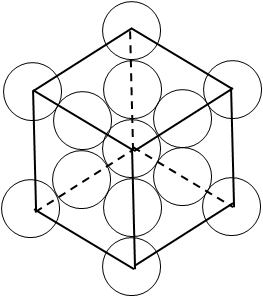 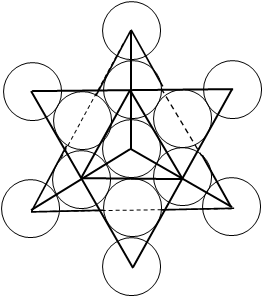 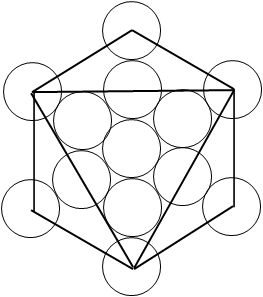 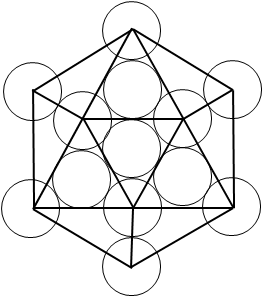 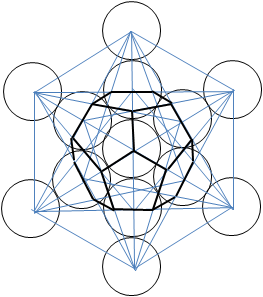 Go here to see a table of information created by Robert Gray.
Each of the polyhedral shapes is shown to have the internal 720° of spherical rotation.
If you do not see animations in the 2nd, 3rd, and 4th columns, click on the “puzzle piece”.
Go to Home page