(This section is still under initial development)

The following quotations are taken from The Urantia Book (UB) followed by (my interpretation) of the information that has been revealed. This information is intended to guide us to the truth. Please read it carefully in order to get the most out of it. In this section, I hope to see a dialog established to further develop an understanding of the mechanics of gravity.
The quotations from The Urantia Book are identified as UB followed by Paper#:Section#.Paragraph#.
UB42:11.5 - "Linear gravity response is a quantitative measure of nonspirit energy. All mass--organized energy--is subject to this grasp except as motion and mind act upon it. Linear gravity is the short-range cohesive force of the macrocosmos somewhat as the forces of intra-atomic cohesion are the short-range forces of the micro-cosmos. Physical materialized energy, organized as so-called matter, cannot traverse space without affecting linear-gravity response. Although such gravity response is directly proportional to mass, it is so modified by intervening space that the final result is no more than roughly approximated when expressed as inversely according to the square of the distance. Space eventually conquers linear gravitation because of the presence therein of the antigravity influences of numerous supermaterial forces which operate to neutralize gravity action and all responses thereto."
(The mechanics of gravity may be explainable by magnetic alignment of the Quanta Field vibrations.)
The following is my expanded interpretation of the above quotation from The Urantia Book (UB).
The UB has references to more than one form of gravity. Linear gravity is their term for gravity as we know it. I believe that the term nonspirit energy is being used to denote the electromagnetic energy, which we "see" as matter, as being something other than the energy of the Quanta Field from which it comes. I would read the first two sentences as - gravitational response is proportional to the mass of matter except as motion and mind act upon it. The reference to mind implies that consciousness and the Quanta Field may be interrelated or may even be one and the same, but that is beyond the scope of my present concept of Quanton Physics.
They then go on to say that matter at the macro level cannot traverse space without being affected by gravity in a manner similar to the way that matter at the micro and quantum level is affected by the charge of electromagnetic energy. They appear to be pointing to two different sources to explain the interrelated motions of matter, "linear" gravity, primary at the macro level and the polarization, or charge, of electromagnetic energy, primary at the micro level. They may be trying to tell us that gravity, as we know it, may not be a single force, but rather the net result of two opposing forces. I will leave interpretation of the rest of the quotation up to you and concentrate on this last point as I believe that this insight leads to a much better understanding of gravity and a solution to the holy grail of quantum physics, the unified field.
This interpretation is supported by work which has been done by Miles Mathis. He has solved the unified field problem by using the radius as the measure of the gravitational field which is in opposition to the electromagnetic charge field as measured by charge density. He does this by showing that the unified field has always existed in the equations for the gravitational field and the electromagnetic charge field but was hidden by a lack of understanding of and incorrect values for the heuristic "G" and "K" see "Unified Fields in Disguise".

The Mechanics of the Gravitational Force 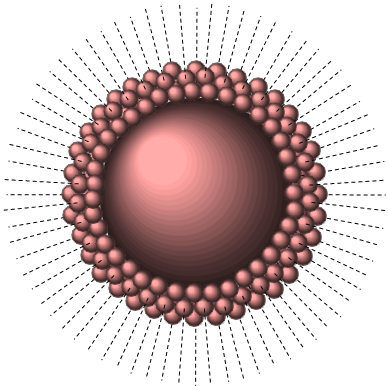 The large center sphere (shown above) represents a material body (let's say a planet) moving through the quantum spheres of the Quanta Field represented by the smaller spheres (magnified beyond belief). The planet is not totally dense. It represents a collection of quanton patterns which expose only a small portion of the Quanta Field quantum spheres enclosed within the planet. The vibrational orientation of the quantum spheres that make up the various quanton patterns imparts a force directed toward the center of the planet. As each quanton pattern interacts with the local Quanta Field it is drawn toward the center by the local orientation of the vibrating magnetic energy.
The interaction is also the cause of the spin of the planet and its associated quanton patterns. The magnetic alignment of the Quanta Field vibrations is represented by the dotted lines radiating outward. If a second object is traversing space at some distance, it will interact with this vibrational orientation and the net effect will be a pull toward the more massive object. The effect of this interaction would fall off with the square of the distance as less radial lines are crossed.

I think that an understanding of this will be required in order to solve the mystery of gravity.
It is very important to realize that Pi = 4 in all kinematic situations such as the creation of a circle or an orbit (you cannot create a kinematic curve using a single vector). This was first discovered by Miles Mathis and described in his paper dated 9/9/2008 and titled The Extinction of Pi. He has used this insight to correct a number of errors in physics, particularly in the quantum area where the effect of the difference is highly magnified. Go here to see a recent addendum to this paper using the Manhattan Metric.
It has proven to be extremely difficult to get physicists to seriously consider the possibility that Pi could ever be 4. After all, they know that at the macro level their equations work well with Pi = 3.1416 and that they would get wrong answers if they were to use 4.0 instead. The point is that all of the equations have to be rewritten. The improved accuracy is hardly noticeable at the macro level but the amount of error is catastrophic at the quantum level.
Go here https://www.youtube.com/watch?v=QhuvUSS3KAE&feature=youtu.be to see a demonstration of kinematic Pi equaling 4. Miles has taken the occasion of announcing this demonstration to pull together references to his various papers on this subject. If you are still not convinced that kinematic Pi is 4, or are interested in learning more about this subject, I highly recommend starting here http://milesmathis.com/pi7.pdf
Go to Home page